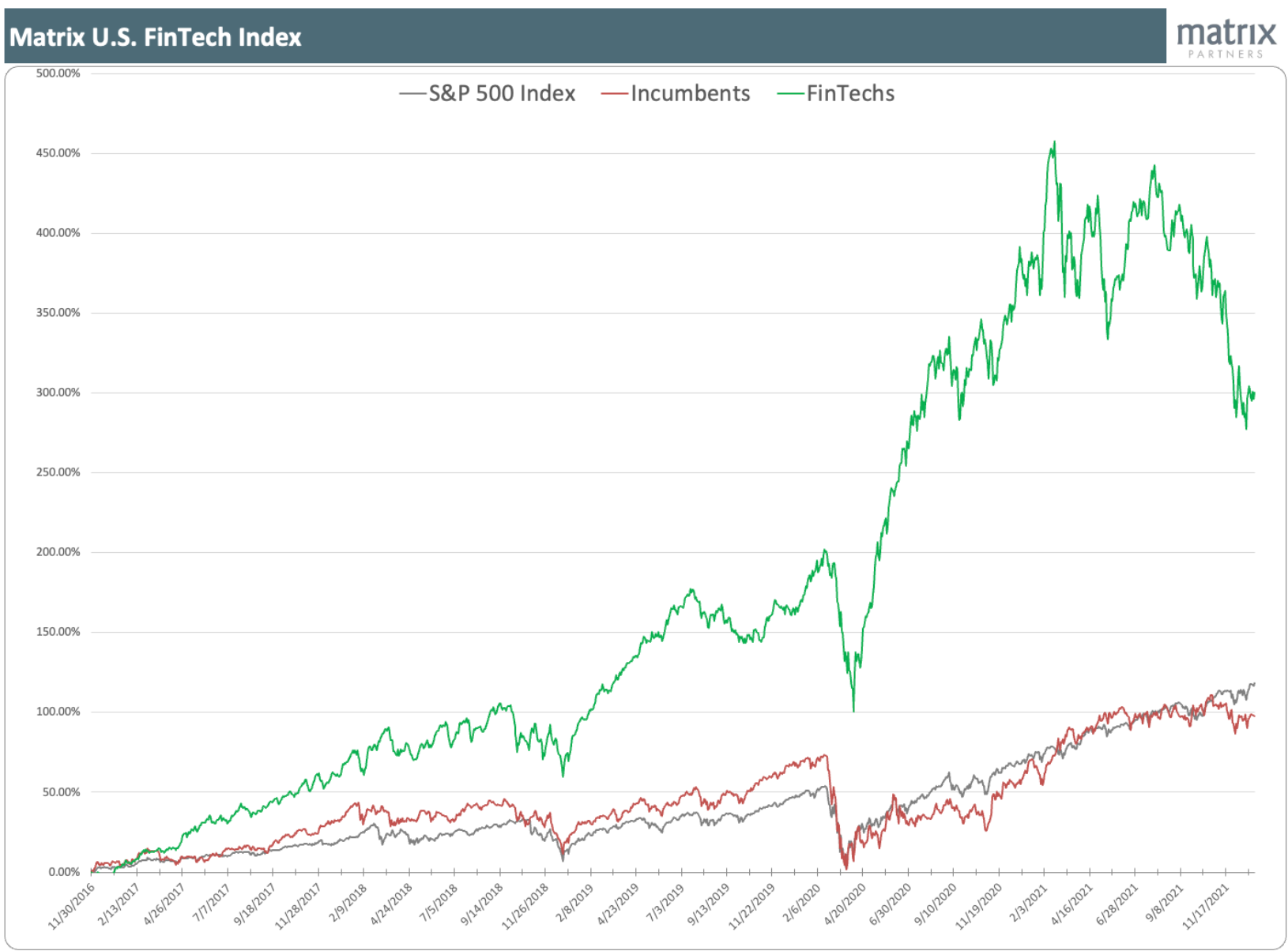 We were bullish on fintech when we launched the Matrix Fintech Index in 2017, but even we underestimated the magnitude of the growth to come. Fintech tailwinds, strengthened by the COVID-19 pandemic in 2020, only accelerated in 2021. And despite public markets’ rocky start in early January, we’re confident that 2022 will be another banner year for fintech.

In this year’s edition of the Matrix Fintech Index, we’ll look at the performance of public fintechs versus the broader market in 2021 and reflect on the private fintech market’s red-hot year. Then, we’ll turn our attention to the year ahead and offer some predictions for fintech in 2022.

The Matrix Fintech Index has significantly outperformed major public stock indexes as well as a basket of legacy financial service providers for the fifth year in a row. As a reminder, the Matrix Fintech Index is a market-cap weighted index that tracks a portfolio of 25 leading public Fintech companies. All the data used to create the index are linked below

Despite a roughly 30% drawdown in the last months of 2021, the Matrix Fintech Index continued to beat the broader market as well as incumbent financial service companies. Fintech’s consistent outperformance signals that the changes brought about by COVID-19 – including shifts towards e-commerce, online payments, and digital interactions over physical ones – are here to stay.

A great year of public debuts for fintechs

2021 was outstanding for fintech IPOs, with notable debuts occurring across several categories. Consumer companies such as Coinbase ($86B) and Robinhood ($32B), infrastructure players such as dLocal ($6B) and Marqeta ($15B), and insurtech providers such as Lemonade ($1.6B) all entered the public market.

There was also increased diversity in the way these companies went public, with some fintechs skipping the traditional IPO process altogether. More companies, such as Coinbase in the US or Wise in the UK, chose direct listings, while Robinhood earmarked $700 million in shares for its existing customers. Others, including Hippo, Metromile, and SoFi, chose to go public via SPAC. While SPAC’s track records have been mixed, even accounting for recent market volatility, the rise of IPO alternatives is a welcome change for the growing ranks of late-stage fintech unicorns.

In last year’s report, we called merchant-funded point-of-sale financing, also known as buy-now-pay-later (BNPL), “one of the most important trends to gain traction in the last four years.” We predicted that BNPL would “cross the chasm to become a mainstream consumer choice, eventually displacing part of the role of credit card debt.”

Between Square’s $29B acquisition of Australian BNPL Afterpay (see our additional commentary here), US-based BNPL Affirm’s $11.9B IPO, and a wave of other fundings and acquisitions, 2021 proved to be a huge year for the space. Despite all that liquidity, we think it is still early days for BNPL. Major providers such as Klarna are still private, though several could go public in 2022. Plus, the BNPL model is seeing fertile ground in other verticals and geographies. See our 2022 predictions below for more.

Looking ahead to 2022 in fintech

We think fintech is unstoppable in the long term, despite some early turbulence. Consumers want fewer (or no) overdraft fees, quicker, more convenient money transfers, and a wider scope of investment options. Fintechs are continuing to deliver better financial services at lower costs to a broader range of people than ever before. Here are some of the most promising areas for 2022.

In last year’s report we predicted that 2021 would see $100 billion in fintech liquidity. Thanks to a bevy of IPO’s and acquisitions, total fintech liquidity easily surpassed $150+ billion.

While January 2022 opened with shaky markets and signs of multiple compression, we believe this year will set another record with at least $300 billion in fintech liquidity.

What makes us so confident? Great businesses are started and thrive regardless of macro turmoil. Those are transitory. However, the sweeping changes brought by widely accessible fintech infrastructure and changing consumer preferences provide a once-in-a-generation opportunity for startups to reinvent financial products the world over.

So there are still large and amazing businesses ready to go public and be acquired, as well as to be funded in the earliest stages. Here are the potential 2022 IPOs we’re most excited about:

Public companies such as Shopify, Bill.com, and Toast showed the power of combining vertical software and natively-integrated payments. We’re confident these companies will continue to shine, but we also believe a new generation is improving on those companies’ models and will even surpass these giants.

This next generation will be built by entrepreneurs who have deep knowledge of a given vertical and can take advantage of a much broader, more robust set of financial products from day one. Being able to monetize via a combination of SaaS and financial products expands a customer's lifetime value and opens more avenues for customer acquisition.

We believe this trend will open up venture-scale opportunities in markets that were sub-venture-scale in an SaaS-only world and will massively expand the TAM of companies that are already at venture scale. 2022 will be a big year not only for these end providers but also for the infrastructure providers that make it easy to launch fintech products, such as banking, cards, and credit.

While BNPL has entered the mainstream in the US via consumer retail, there are many more geographies and sectors where the model can thrive. Whether it’s applying BNPL to other markets, such as Western Europe or LATAM, or applying it to sectors such as B2B payments, we think this model can go much further in reshaping payments and the use of credit. As smart entrepreneurs continue to build on the lessons learned by current BNPL giants – including the importance of point-of-sale placement and frequent touchpoints with the buyer – we think the BNPL model has plenty more room to grow.

Last but not least, this year’s crop of fintech IPOs, acquisitions, and fundings have definitively shown that multi-billion dollar fintech companies can be built anywhere in the world. As economies move online, payments shift from cash to digital, and traditional financial institutions continue to underdeliver for consumers and businesses, we believe there will be massive opportunities to reinvent financial services far beyond the US.

Dataset for the Matrix Fintech Index

As we have in previous years, we provide the full dataset used to generate the Matrix Fintech index below. It contains updated information on both fintechs and incumbents. You can download it here. As always, we appreciate your feedback and thoughts on our process and methodology. And we look forward to sharing our thoughts again in 2023!