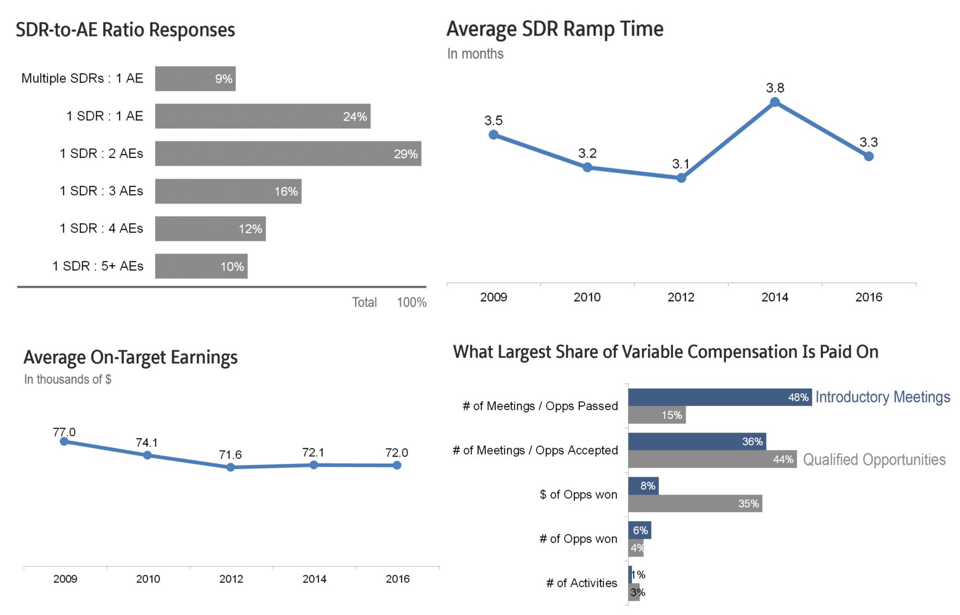 Sales development teams are taking a much more data-driven approach in recent years by closely tracking their metrics and performance. Benchmarking your performance against other companies offers a valuable way to see how your company stacks up against the competition.

We have collaborated again this year with The Bridge Group, an inside sales research and consultation organization, to help distribute the Sales Development Metrics and Compensation Research Report. This report provides valuable benchmarking data showing how metrics and compensation have changed over time for sales development teams.

You’ll find data that answers the most important questions sales development teams have, including:

Many thanks to Matt and Trish Bertuzzi of the Bridge Group for their work in producing this invaluable resource. To download the full report, click here. You can find more resources on inside sales on the Bridge Group’s website.

New in this year’s report

In order to effectively compare performance between companies, we need to define what a “world-class” sales development team looks like. There are many variables to consider: how do you compare an inbound SMB group vs. outbound enterprise group? Do more reps at/above quota mean the team is more productive or does it mean quotas are artificially low?

To more accurately define and compare performance between companies, the Bridge Group has introduced the Power Pipeline Score (PPS).

The Power Pipeline Score, scaled from 1–100, compares the effectiveness of sales development groups against one another. By weighting a number of variables that The Bridge Group believes indicate good performance, they assigned respondents a PPS score. A company’s PPS score takes into account several factors, including average sales price, inbound qualification vs. outbound prospecting focus, and percentage of reps achieving quota. The single biggest weighted factor is number of sales-accepted opportunities a group generates.

The average PPS was 48, and 60% of companies scored between 20 and 78. Throughout the results, we’ll be indicating how various data points affect companies’ PPS scores.

About the companies who participated

A diverse group of 355 companies participated in this year’s research.

Every company’s SDR model needs to be tailored to their organization. Effective sales development means maximizing the productivity of both the SDR and the Account Executive teams.

There are two main models in play here:

Whether you utilize one strategy or the other, or take a blended approach, will depend on your organization. Companies who are selling a product into an immature market may want to consider an introductory meeting model. This model should also be considered if your sales team’s calendars are not filled and they are ready for more “at-bats”. The data shows that companies under $20M in revenues are 1.8x more likely to develop the introductory meeting model than those over $50M.

No. There was no significant variation in average PPS by type of model.

Just over half (51%) of companies report segmenting inbound qualification and outbound prospecting into separate roles.

The benefits of specialization are 1) tighter focus and increased accountability, 2) process alignment with prospect behavior, 3) defined career paths, and 4) role-specific innovations. Companies with $100M+ in revenues are nearly twice as likely to specialize as companies under $5M in revenues. Somewhere between $5–20M appears to be the inflection point for when companies begin to break sales teams into specialized roles.

The Bridge Group recommends that a specialized sales role approach should be taken if:

The average ratio is 1 sales development rep (SDR) to 2.5 Account Executives (AE), which is down sharply from previous reports.

Comparatively, the ratio was 1 SDR to 3.9 AEs in 2014. There is wide variation, much of which can be attributed to company size. Smaller SaaS companies in particular, deploy higher SDR to AE ratios, meaning one SDR supports fewer AEs.

There is no “standard” territory strategy

The Bridge Group’s research identified 23 different schemas for determining territories. About half of companies use a single factor in building sales development territories.

Geographic territories remains the leading approach, but more than 30% of teams have moved away from traditional territories and implement round-robin or shark tanks/pools. For groups focused on inbound lead qualification, the percentage using round-robin rises to 60%.

When sales development first emerged, reps were typically partnered with three or four AEs and if sales had geographic territories, so did the sales development team. But, inbound leads tend not to arrive in equal shares per territory. Therefore, setting equitable inbound quotas using geographic territories can be a nightmare. Rather than building in complexity to compensate for unfairness, companies are moving away from traditional territories and towards more creative approaches, as noted above.

Required experience for SDRs is declining

Demand for candidates has risen steadily since 2010, so required experience has declined and has hit an all time low. This year, the average experience required was 1.3 years, an 18% annual rate of decline since 2009. Four times as many companies are hiring reps with less than one year sales experience as did in 2010.

However, required experience rises along with a company’s average sales price.

Yes. Groups that require 2+ years of experience achieved 12% higher PPS than those that don’t, on average.

To attract more experienced SDRs, Bridge Group recommends creating a compelling employer value proposition, paying more in base and OTE, and offering a rock solid career path that makes your company the place to learn and grow.

Ramp time is down

Despite the decline in required experience, companies are proving effective at bringing new reps up to speed quickly, showing that they are committed to investing in onboarding and sales enablement. To learn more about onboarding best practices and how to implement a plan for your company, you can read this article: A Strong Team Starts at Onboarding.

Average tenure is down sharply

Now only 5% experience that kind of rep longevity.

An important tool in increasing retention is offering a career path for reps. A full 85% of companies offer at least one of the following. Nearly one quarter offer two, and 16% have built all three.

Companies with more than $20M in revenues were three times more likely to offer multiple career paths than smaller ones.

It’s important to strike the right balance for promotion; you never want to hold a rep back from promotion to hit your SDR team number, but you also don’t want to promote reps before they’re ready. It’s important to set your reps up for success as they move up to an AE role. Interestingly, those companies who used the SDR-to-AE career path, but who waited at least 12 months to make the promotion, achieved a higher PPS on average.

Base and OTE are flat, again

Compensation has been trending downward (in nominal and real terms) since 2009.

While roughly 10% of respondents offer on-target earnings of $100K+, the trend of hiring less experienced reps is pulling down average OTE for the SDR role.

There are five times more companies hiring reps with less than one year’s experience today than in 2010.

There are several variables that impact SDR compensation including:

79% of companies report using one or two components in variable pay.

There is a strong impulse to equate quality with closed business. This often translates to paying the bulk of incentive compensation for closed deals the SDR sources.

From a management perspective, this is couched in terms of “driving alignment with the business.” From a rep perspective, this often feels like “screwing me for things outside my control.” The Bridge Group recommends you shouldn’t tie more than 20% of incentive comp to “opportunities won”. If you have a complex sale with cycles running 120+ days, don’t tie any incentive compensation to wins.

Monthly quotas are up

There are four variables to take into consideration with monthly quotas:

Setting quotas is difficult. Use the meeting setting and qualified opportunity numbers as benchmarks then adjust up or down based on the four factors we’ve highlighted. Keep in mind that making quota an achievable goal at your company will set the tone of your culture. Make it attainable and you’ll have a group of competitive reps with a positive attitude. Make it too much of a stretch and you’ll have miserable reps and a high attrition rate.

In a given group, 68% of reps are achieving quota.

There will always be a distribution of rep performance, and according to The Bridge Group, ~65% of reps at quota seems about right.

SDR contribution to pipeline is flat

Smaller companies (sub $5M) have a very high percentage of total pipeline sourced by sales development. Eliminating them brings the average contribution to pipeline down to 49%.

Average dials and conversations down slightly

Attempts per prospect is up

Does the number of attempts per lead affect Power Pipeline Score?

Yes. Companies where reps make nine or more attempts per prospect before moving on reported 16% higher PPS. The sweet spot appears to be 9–12 attempts. Those executing 13+ attempts achieve 8% higher PPS than the 1–8 attempts group, but lower than those making 9–12 attempts.

Leads per month per SDR

As ASP rises, the pool of reasonable prospect accounts falls, due to the fact that there is simply a smaller group of prospects to sell to. Because of this, higher selling price typically requires account-centric prospecting (or account based sales development).

Even for lower ASP groups, it can help to coach reps on a minimum of two-no’s rule. An account shouldn’t be marked ‘no contact’ until at least two prospects have said no (or not responded).

Bandwidth is often cited as a barrier to this two-no’s rule. But, SDRs should be in the business of building pipeline, not (only) satisfying SLAs. This requires a shift in mindset, but is very important for higher productivity.

No. Surprisingly, a lower leader-to-rep ratio is not associated with a higher PPS. Despite increased competition for talent, hiring less and less experienced reps, and greater numbers of reps rolling up to a single first-line leader, today’s sales development leaders are rising to meet the challenge.

The top leadership challenge from 2 years ago, productivity and performance, has dropped seven percentage points. While clearly still a top challenge, there is a growing realization that having a very solid process matters. Surprisingly, list and data sourcing has risen to the top challenge. You might assume that with new tools, technologies, and enhancements would assist in providing better data, but, apparently this is not the case.