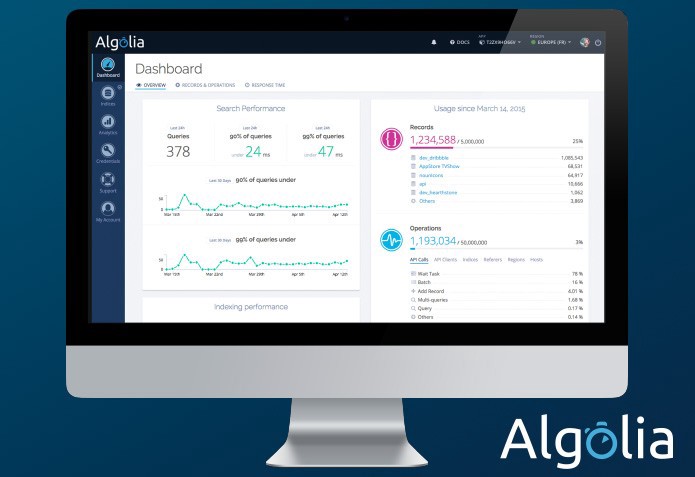 We recently sat down with Gaetan Gachet, VP of Sales, to learn about the unique tactics Algolia used in the early days that helped get sales off the ground.

How did you demonstrate Algolia’s value and get sales going in the early days?

Gaetan: Early on we built a lot of hacks, which worked really well for us. We built a LinkedIn team implementation where the user entered their LinkedIn login information and we built a search engine on their connections up to the third level. As they typed to search for someone, results came up in milliseconds. It was much better than LinkedIn’s default search.

Hacks like these helped people instantaneously compare their current world to how it would look powered by Algolia. It really helped people connect immediately with the “why” of the product.

We wanted to recreate what Google did for the web. When you’re on Google you don’t feel the depth or immensity of the web. No one ever goes to page 2. The user always feels like they’re immediately connected to what matters to them without even seeing the rest.

What are some other unique approaches or hacks you’ve tried?

Gaetan: We made some outbound efforts early on. During Y Combinator 2014 I had a very scrappy outbound email campaign. We either sent a link to a demo or listed out particular issues we saw on someone’s website and how we could help solve them. We focused on showing that our team had taken the time to get to know their particular use case before contacting them. Within a few seconds of opening a cold email, a prospect could tell it was custom created just for them. That campaign brought me two early deals — ThredUP in San Francisco and LightStream in New York.

At the beginning we aimed to have developers incorporate us in their day-to-day processes. It’s important not to be intrusive within the developer community — it’s not appreciated. Developers hate anything that smells like sales or marketing, which we understand. Instead, we focused on getting in front of people more subtly.

We powered Product Hunt early on (and still do today). People began to see our logo and say… “Oh, cool”. Even before they interact with us we’ve created a positive association with the brand and product. When we start a conversation social proof already exists, from Product Hunt or several other places, which lends credibility.

How does your sales approach differ with varying size prospects?

Gaetan: The larger deals we’ve closed always start with an individual contributor within an organization. Usually they have identified us through having seen us on another site. For instance, we built a free GitHub Extension which allows for extremely fast search inside repositories in GitHub. After using the product themselves, the individual contributor might talk to their boss and begin using us on special projects. Then, when we build a demo later on, we already have a champion and can move up the food chain inside the organization.

Another tactic with larger prospects is to create demos that are pixel perfect and production-ready. They are what we call an ‘internal trojan horse’. People start to use the demo and it really clicks — when they play around with it the value becomes obvious. It’s a big investment for our engineering team, but we’ve had a lot of success with larger clients using this approach.

What are some other approaches you’ve taken that have worked well?

Gaetan: We built SuperSearch, a website for the Super Bowl where you can search through all the Super Bowl commercials ever made. It resonated with a lot of people because the audience for this type of site was really big.

We also built something called SearchStone, based on the card game Hearth Stone. A member of our team was really into the game so he built a search experience to find different cards, which you can’t even do in the game. It really shows off the different search features we offer; you can filter different categories of cards or different types or colors in a very interactive search experience.

We’ve also recently released something called DocSearch. It’s a free product to search through API documentation. If you’re a tech company with an API, you can plug it into your website and we automatically build the search engine. It creates a lot of goodwill with the community. We’ve found that if you do good, good will come back to you. Today DocSearch powers documentation for over 200 developer frameworks & languages, including React, Scala, Laravel & more.

For more on Algolia, check out: Algolia: Getting Sales Off the Ground