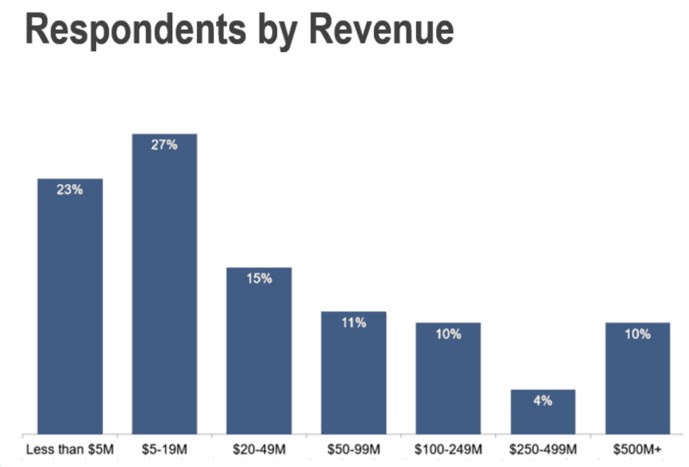 Since 2007, The Bridge Group has tracked the Account Executive (AE) role and gathered data on how metrics and compensation change over time. We’ve partnered together to publish the 2017 SaaS AE Metrics Report and offer sales organizations a set of benchmarks to compare themselves against industry standards.

This report offers specific analysis and recommendations based on a deep dataset to help inform the way SaaS companies build out their inside sales strategy and consider changes to their sales organization.

Read on for an overview and highlights from the report, or click here to download the full report.

About the companies who participated

Building territories based on geography remains the leading approach. This method makes lead distribution and routing easy. While there is a belief that geographic territories are entirely a hold-over from a bygone era, that’s not entirely true. There are clear pluses to geographic territories, including time zone alignment and local sub-verticals (e.g., Startups in San Francisco, higher education in New England, oil & gas in the Gulf Coast, etc,).

I personally prefer the idea of assigning geographical territories to reps as the company gets larger, as they can then develop territory plans, identify the best accounts in their territory and create plans for how to win each of them in a prioritized fashion.

At roughly $25–50M in revenues, territory design increases in complexity — the percentage of respondents using No Territories and Round-robin falls by half, while usage of Vertical Territories and Named Accounts more than double.

The approach that has been deployed most successfully here is to keep things simple, until you can’t. The no territories approach that served you well up to $10M ARR might hinder your growth to $100M.

Across all respondents, outbound sales development generates roughly one-quarter of total AE pipeline. Controlling for company revenues, the percentage of SDR-sourced pipeline increases as ACV rises. This isn’t very surprising, as the reality is that outbound prospecting is expensive. For companies with lower ACVs, the CAC:LTV math can be difficult to balance with an outbound sales development channel.

34% of companies support the customer lifecycle with three distinct sales roles: SDRs, AEs and CSMs. When companies under $5M in revenues are removed, that number rises to 40%. Beyond $20M in revenue, it is surprising how little variation there is in deploying this approach.

Average contract value, as you might expect, has a pronounced impact on the likelihood of three-role specialization. Even when already controlling for company revenues, this approach grows more likely to be deployed as ACV rises.

It is worth noting that the majority of companies have not adopted this approach. Judging exclusively by information offered in blog posts and shared from conference stages, one might infer this strategy is nearly universal, but data from this report does not bear this out.

49% of groups have reps in the same role working in different locations. The drivers are as you might expect. Offices are added via acquisitions. And increasingly, there is difficulty in recruiting and retaining talent at headquarters (two examples being San Francisco-based Slack opening their Toronto, Ontario office and NYC-based DigitalOcean with its Cambridge, MA office).

Unlike previous years’ findings, companies investing in secondary sales locations are not finding much cost savings. In fact, on-target earnings at secondary locations were nominally higher than those at primary locations. Clearly, this is more often an access to talent play than a cost-cutting maneuver.

Virtually unchanged since 2010, average rep tenure sits at 2.4 years. Average tenure rises alongside ACV. In theory, these two metrics should be unrelated, but the finding persisted when even when controlling for company revenues, on-target earnings, and other factors.

Total turnover fell slightly from 2015 and now averages 30%, with involuntary attrition making up slightly more than half of that. For this report, involuntary turnover is defined as attrition resulting from termination and voluntary turnover being attrition initiated by the rep (e.g., resignation). Respondents were asked to exclude promotion and/or internal transfers from these calculations.

The percentage of reps with six-figure OTEs has been steadily rising. Noted for the first time this year are median on-target earnings exceed $110K.

On average, quota was found to be 5.3X OTE. Another good check, your quota should be about five times greater than the on-target earnings of your salesperson. (For the highest performing companies, it is not unusual to see quotas in the 6–8X OTE.)

Quotas are on the rise

As ACVs rise, so do quotas. It is worth mentioning that quotas in each ACV band increased from 2015 to 2017. The average increase being roughly 8%.

Once a salesperson exceeds their quota, they have covered their costs, and start to become extremely profitable to the company. So rewarding high performance with accelerators can make good financial sense. Accelerators and other awards can also help attract the best talent. It can be a big help to recruiting to have stories floating around of reps who have made big money.

As you might expect, the higher the ACV, the fewer demos per AE per week.

Controlling for ACV, we compared those groups supported by SDRs to those without SDR support. It was expected that results would indicate a large uplift for the latter, but that was not the case. SDR-supported AEs reported only 0.8 more demos per week, on average.

Email automation and tracking, contact data and account intelligence, and contract e-signature tools are the furthest along on the adoption lifecycle. These classes of technologies are the only three to have crossed into the late majority stage.

All of the remaining technologies (but one) have “crossed the chasm” into the early majority phase of adoption. Gamification and leaderboards sit right on the cusp, but today remain in the early adopter stage.

On average, companies reported spending $477 per AE per month on acceleration technologies. Here is an analysis of the most common bundles:

For under $100 in monthly spend, the most common double-play includes:

For under $250 monthly, the most common triple-play includes:

For under $500 monthly, the most common four technologies include:

For under $1000 monthly, the most common bundle includes:

As a rule, AEs at companies below $5M in revenue are much more likely to report directly to VP or C-level leaders (53% of respondents versus 8% at companies above $50M.)

Think about just how rare it is to find someone who combines vision, business acumen, and the ability to inspire others. But, that is exactly what a sales leader needs to possess. To set the stage, here is the Bridge Group’s take on the levels of sales leadership:

On average, 7.2 AEs report to a single leader. This is up from 2015 and a continuation of a long-term rise.

As a general rule, the higher the company revenues, the more AEs a single leader supports. Logically, this is sound. As companies find product market fit and grow, there are more moving pieces and evolving processes. AEs need a lot more individual attention. Once a company has moved from identifying repeatable and scalable to growing and expanding, leaders tend to become less hands-on, at least in theory.

Respondents were asked to identify their top two challenges in managing AE groups. Below are the results and how they’ve changed since 2012. Notice the remarkable consistency of the top four challenges.