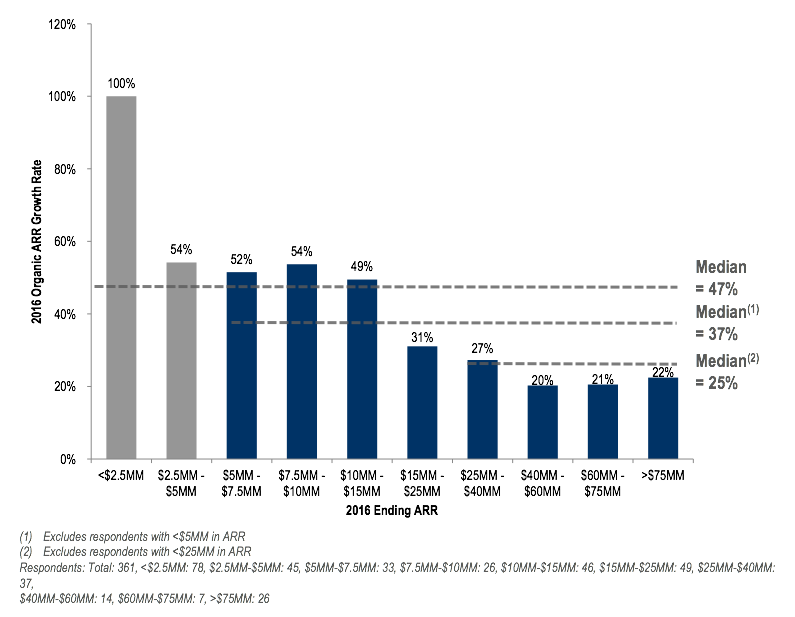 For the sixth year in a row, we’re proud to work with KBCM Technology Group (formerly Pacific Crest Securities) to share results from a survey of over 400 SaaS companies. The survey represents deep benchmarking data and insights on growth and operations of private SaaS companies.

Thank you to the readers of forEntrepreneurs who participated in taking the survey this year! Thank you also to David Spitz (@dspitz) and the team at KBCM Technology Group for their work on the survey.

We have made some important changes this year, including: (1) using annual recurring revenue (ARR) rather than GAAP revenue as a primary gauge of size and growth; and (2) asking respondents to provide precise numbers (vs. ranges) for certain key data.

How Fast Did You Grow ARR Organically in 2016?

Median Growth Rate as a Function of Contract Size

Median Growth Rate as a Function of Sales Strategy

All else equal, the data shows no discernible advantage (as measured by successful growth) for Field-dominated vs. Inside-dominated distribution. Interestingly, though the data is somewhat sparse, Channel-dominant strategies show some real strength.

Median Growth Rate as a Function of Target Customer

Companies focused either 1) mainly on the high-end or 2) mainly on the mid- and low-end (Mid-market, SMB & VSB) grew modestly faster than mixed or Enterprise / Mid-market companies. In comparison, last year’s results indicated there was minimal correlation across these groups.

Not surprisingly, the fastest growing companies spent more on Sales & Marketing. These results are in line with previous years’ results.

CAC Ratio: How Much Do You Spend for $1 of New ARR From a New Customer?

Respondents (excluding the smallest companies) spent a median of $1.15 to acquire each dollar of new ARR from a new customer. This is similar to last year’s result of $1.13.

While it is difficult to assert that there is significant correlation between size of company and CAC ratio, there appears to be a modestly higher tolerance among larger companies to spend more on CAC.

Other than Internet and Channel sales, where CAC appears significantly lower (but data is sparse), there is no significant correlation between go-to-market approach and median CAC, nor is there a meaningful difference between the distribution of responses.

CAC Ratio Spend as a Function of Target Customer

Not surprisingly, the median CAC ratio for companies targeting larger enterprises is higher than that for those targeting VSB, SMB, and Middle Market companies.

Overall, the median company devotes 30% of their S&M expenses to Marketing, with the remainder allocated to Sales. However, Internet sales-driven companies have much greater reliance on Marketing at 75%. This year’s results are largely consistent with previous years’ results.

Respondents reported an implied median CAC payback of ~18 months, though there was a wide distribution of responses. Results are largely consistent with previous years.

What Percentage of New ARR Is From Upsells & Expansions to Existing Customers?

Professional services play a minor role for most, with the median company booking P.S. revenues on new deals equivalent to 14% of first year subscription contract value. Median P.S. margins are approximately 26%. In comparison with previous surveys, P.S. margins increased from ~22% last year to 26% this year.

As expected, companies that are mainly focused on enterprise sales have higher levels of professional services. In comparison with previous results, attach rates ticked up for Enterprise (18% in 2016 survey results).

The survey results did not point to a significant difference in direct and fully loaded commissions between companies that predominantly use a Field go-to-market strategy vs. Inside sales.

Sales Commissions as a Function of Median Contract Size

Commissions on renewals are either non-existent or very low. Upsells this year command a commission rate nearly as high as new customer sales. The most significant change this year was with respect to how companies are commissioning upsells with 71% of companies this year providing full commissions on upsells, vs. 59% in last year’s survey results.

I’d love to hear your thoughts and feedback on Part 1 of the SaaS Survey results, please leave a comment below.

You may also be interested in the forEntrepreneurs SaaS Infographic for highlights from this year’s results presented in a visual format.

MORE FROM VIEWPOINTS
Investing in FeaturePeek
Ilya Sukhar
May 13, 2020